Cultivating Care-Pathologies of Difference
May 10, 2022

Under the title Embodied Entanglements, three constellations (Hostile Environments, The Master’s Tools, and Invasive Species) consider the entanglements of racial capitalism, medicine, and the environment. Coalescing around different, yet interrelated themes, the texts are spurred by close readings of a selection of artworks and archival materials. Looking to examples and approaches that reclaim subaltern geographies from which to understand history and our natural environment, the artworks and historical objects—photographs, video, paintings, sculptures, and works on paper—constitute a diverse array of intellectual projects that mobilize alternative framings of value and history, relationships to place, labor, and nature. 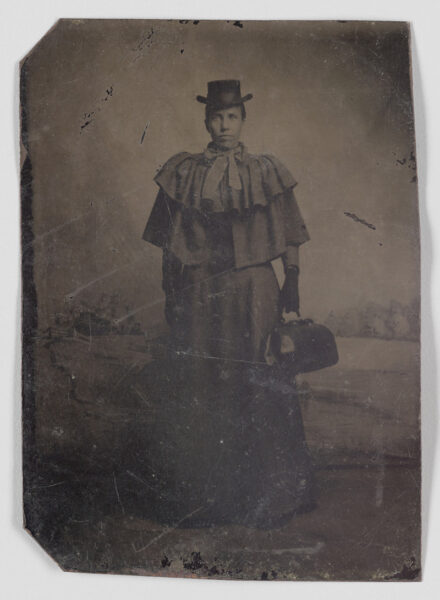 Tintype of a woman carrying a medical bag, 1890s. Collection of the Smithsonian National Museum of African American History and Culture. Public Domain

This text opens with an image dating to the 1890s of a woman standing before a painted pastoral backdrop, wearing a dress, cape, hat, and gloves, and holding a doctor’s case. Titled Tintype of a woman carrying a medical bag, the image breaks with historical and contemporaneous depictions of doctors as invariably white men. This unnamed woman of color stares directly into the lens, her expression fixed and serious. Her image is a refutation of the whitewashing of medical history and of the occlusion of Black doctors, nurses, herbalists, midwives, and patients whose knowledge, invention, sacrifice, and suffering have been the very foundation of modern medicine. 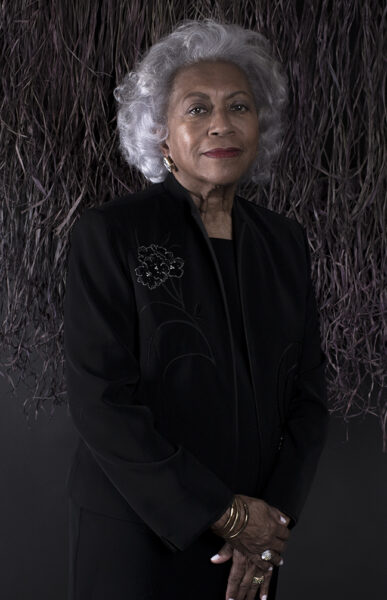 This doctor may have been a contemporary of Annetta M. Lane, a nurse who founded the United Order of Tents in 1867 while she was enslaved to care for the sick and elderly and to bury the dead.[1] The secret society of Black women medical practitioners continues to this day. A color portrait shows Annette Richter, Lane’s great-great-granddaughter; this is one photograph from a series of color prints of members of the Tents, photographed by filmmaker Madeleine Hunt-Ehrlich with art direction by Simone Leigh on the occasion of the Tents’s 150th anniversary in 2017.[2]

Alberta Whittle’s 36-minute video business as usual: hostile environment: A REMIX (2021) considers, through non-linear narrative cycles, the historical continuity of anti-black racism and xenophobia that mirrors increasingly hostile physical landscapes wrought by climate crisis through the lens of the Windrush Scandal and high levels of Black mortality due to COVID-19. The term “hostile environment” refers to a Conservative government policy legislated in 2012 that sought to make the UK unlivable for “illegal” immigrants by tasking social services including the National Health Service (NHS), housing, as well as employers with enforcing immigration controls. In her film, Whittle included archival images of Black Caribbean nurses who were recruited by the “mother country” to rebuild Britain and meet labor shortages after World War II. They were Britain’s care workers, staffing the nascent NHS as nurses, doctors, janitors, and administrative staff. Now known as the Windrush Generation due to their arrival on the HMT Empire Windrush passenger liner that sailed from the Caribbean to Essex in 1948, this generation re-entered the public imagination with the Windrush Scandal of 2017-2018, when it emerged that British citizens of Caribbean heritage were being detained, deported, and denied access to essential services like the NHS.[3] In one segment of the video, Whittle narrates text that appears on the screen over footage that includes Parliamentary debates of the scandal, photographs of Black NHS nurses from the 1960s, and an image of Mary Seacole, the Jamaican-British nurse who founded a hospital for injured British servicemen near the battlelines of the Crimean War (1853-1856). Whittle states:

With the SARS Covid-19 pandemic, many of the same communities who come from a migrant background have been leading at the frontline, risking their lives every day after being relegated to the margins and are still dying in disproportionate numbers compared to their white counterparts. The legacy of how the hostile environment continues to endanger the lives of the Windrush generation as well as BIPoC communities is still felt every day in racism and anti-Blackness.[4]

The confluence of conditions—occupational risk, uneven access and discrimination within the healthcare system, and environmental racism—is at the root of the fact that Black Britons were four times more likely to die of COVID-19 than their white counterparts, that the first ten doctors to die of COVID-19 in the UK were all people of color, and that despite only 40 percent of doctors in the UK are from non-white backgrounds, 95 percent of the medical professionals who have died from coronavirus were from minority backgrounds.[5]

Whittle’s panoply of images, sometimes told through a split screen and with the collaging and layering of images, reinforces the sense of interwoven, interdependent, and recurring histories. She calls for breath and calm and repair, and for personal protective equipment (PPE) for healthcare workers. Like Tintype of a woman with a medical bag and the portraits of the Tents members, Whittle brings Black healthcare workers back into focus, while contextualizing the hostile social and material environments they have faced.

[2] Madeleine Hunt-Ehrlich has engaged in an extensive oral history and film project with the United Order of Tents, see above for more info; Simone Leigh’s practice has been invested in the work of the United Order of Tents, with the Free People’s Medical Clinic (2015) and The Waiting Room (2017) both engaging with the Tents’s and other Black radical traditions of community-focused healthcare; for more information on the Tents, see: Kaitlyn Greenidge, “Secrets of the South,” LENNY, December 7, 2017, https://www.lennyletter.com/story/secrets-of-the-south/.

[3] The Windrush Generation arrived in the UK between 1948 and 1973, many as children. Under the hostile environment rules of 2012, they suddenly had to prove their right to remain in the UK. They had departed the British West Indies after WWII as British subjects, and the children had traveled on their parents’ passports. The Home Office had, through malevolence or negligence, destroyed thousands of landing cards and other records, and the burden was placed upon these individuals to provide proof of residence for every year they had lived in the UK since 1973. In 2017 and 2018, news reports emerged that British citizens of Caribbean heritage, unable to prove their immigration status, were being denied access to the NHS, housing, and pensions; others were detained and deported to countries they hadn’t known since childhood. The emotional, psychological, economic, and physical harm caused by these policies and their enforcement is hard to measure with many people losing benefits, employment, and housing. Lives were lost in custody and upon deportation. Already discriminated against within the NHS, not to mention all sectors of society, Black Britons, and specifically those of Caribbean heritage, faced another barrier to healthcare as the government introduced immigration checks and charges for non-UK residents, weaponizing a service that was designed to be free at the point of delivery.

Enslaved Medicine and HealersPolicy and PoliticsPublic Health
Previous
Next