Pathologies of Difference: An Introduction

Pathologies of Difference maps the ways medicine and race shaped colonial expansion and traces their impact on perceptions of racial difference, disease, and health today.

Colonialism depends on maps. Dividing the globe into discrete climactic, geopolitical, and cultural zones, cartography made the world legible and thus controllable. Maps like John Bartholomew’s British Empire throughout the world exhibited in one view made imperialist expansion both possible and visible.

The margins of this map are populated with figures representing the peoples of the Empire’s colonized territories. Each of the world’s geographical zones was assigned a racial type. Mapping organized the colonial world. The following objects reveal how similar forms of visualization and representation have been applied to people’s bodies, transforming the diversity of human life into “maps” of racial difference. 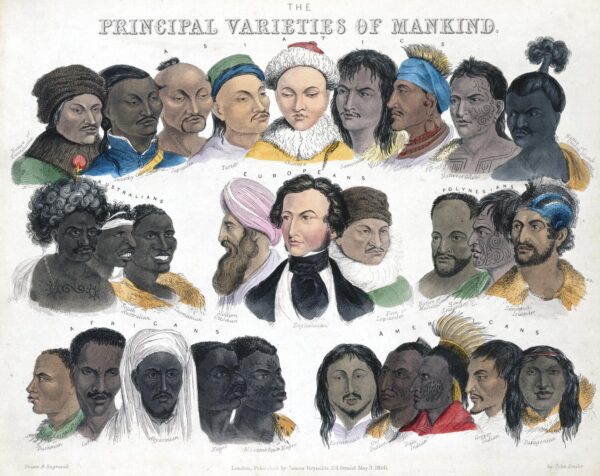 John Emslie, The Principal Varieties of Mankind, 1850. Science Museum Group Collection. © The Board of Trustees of the Science Museum. Creative Commons Attribution-NonCommercial-ShareAlike 4.0 Licence

Images like this 1850 “Geographical Diagram” by scientific illustrator John Emslie helped popularize the idea that humanity was divided into discrete races, legible in terms of visible bodily differences including skin color, hair texture, and face shape. The image, with individuals grouped by region, forms a map of humanity. Just as Britain was centered in geographical maps of empire, the focal point of this composition is a suited, white Englishman. Through its placement, this phenotype was established as a standard, from which the other “varieties of mankind” diverge to varying degrees. Images like this one helped establish hierarchies which informed how people understood race. In popular culture, scientific research, and medical practice, the bodies that deviated from this standard were pathologized as abnormal, deformed, or deficient. 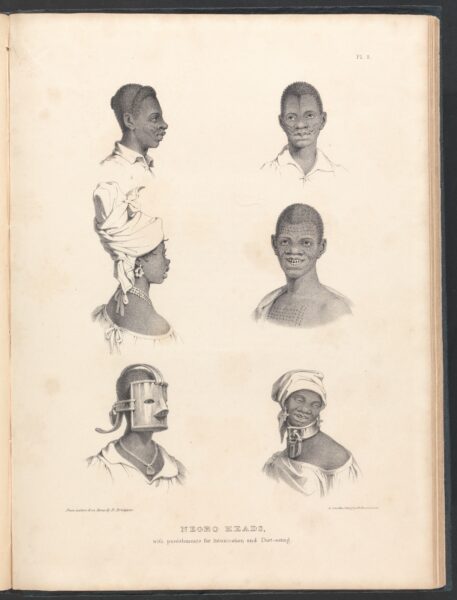 Richard Bridgens, “Negro Heads with Punishments for Intoxication and Dirt-eating,” in West India scenery with illustrations of Negro character, the process of making sugar, &c. from sketches taken during a voyage to, and residence of seven years in, the island of Trinidad (plate 2), 1836?. Yale Center for British Art. Public Domain

These hierarchies were used to justify exploitation. In the Caribbean and US South, plantation physicians transformed the behavior of enslaved African people into spurious medical conditions like Cachexia Africana, a “disease” which supposedly manifested as a compulsion to eat soil and was thought to only affect Black people. Patients were forced to endure violent “treatments,” including a metal mask which prevented them from eating. As a scientific discipline, medicine has often served to legitimize such violence by making racial categories appear like facts of nature. The use of scientific authority to make racist biases seem objective, and racial injustices seem natural, is today known as “scientific racism.” 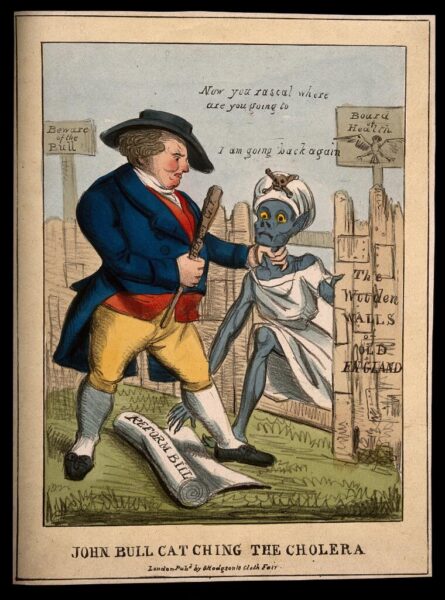 Scientific racism and imperial cartography divided the globe and its peoples into manageable races and zones. Yet colonialism also violently reshaped that map, especially through the unprecedented displacement of human populations to distant parts of the world as a result of the slave trade, indentured labor, and settler colonialism. 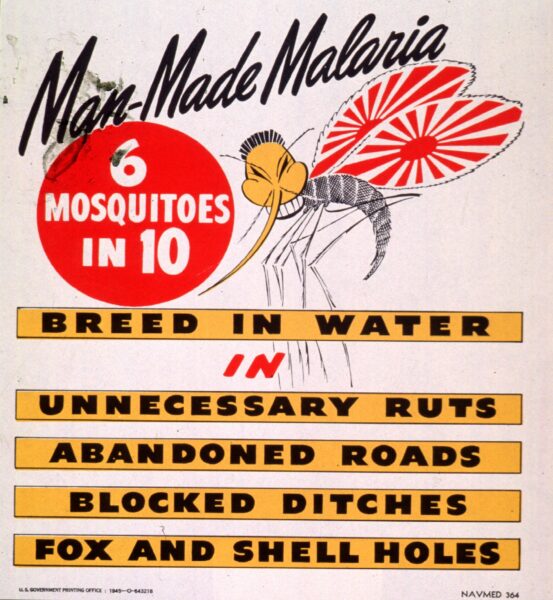 One consequence of these processes was the global spread of infectious diseases like cholera and malaria. The cholera pandemics of the nineteenth century originated in India but were spread worldwide along British trade and military networks, for example. Malaria became an urgent concern for the United States military in the 1940s, as their occupation of tropical Pacific nations exposed their forces to pathogen-carrying mosquitos. In images such as these, however, racialized peoples were identified as vectors of these diseases, obscuring the critical role of colonial expansion in facilitating their transmission. Just as bodily differences were pathologized, diseases were racialized. This legacy can still be felt in the framing of COVID-19 and its variants as “Chinese,” “Indian,” or “South African” viruses.

Today, race is largely discredited as a scientific concept, but these histories continue to shape our understandings of the body and our access to health. This “Ancestry Composition Chromosome Painting” is used by the DNA-testing company 23andMe to visualize its customers’ genealogical data based on chromosome sequencing. Visually, this colorful contemporary graph scrambles the logic of John Emslie’s nineteenth-century diagram. Rather than a set of visibly distinct “principal varieties of mankind,” it suggests that each individual is the product of long and complex histories of migrations and mixings. However, it also continues to divide human life into geographical categories—“Iberian,” “Native American,” “African Hunter-Gatherer”—which recall nineteenth-century maps like that by Emslie. Do these kinds of visualizations help dismantle colonial constructs of race, or risk relocating them at an even deeper level of the body than skin, hair or facial features: in the genes themselves?

Pathologies of Difference traces the intersections of race, medicine, and colonialism. In doing so, we hope to redraw the map and open up new spaces for understanding health, illness, and care.