Documentations of Medicinal Plants in the Eighteenth-Century Caribbean

In their initial research (2020-2021), Art Hx team members located a number of significant eighteenth-century representations of medicinal plants identified in the Caribbean context hosted in collections around the globe. These images offer routes to a complex feminist and decolonial historiography of pharmacognosy and bioprospecting, or the search for and study of medicines from natural sources. 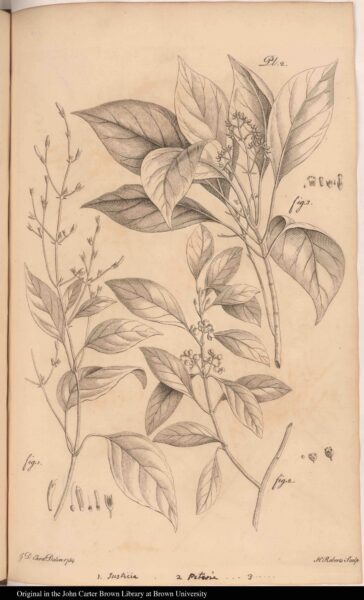 Justicia, unknown plant, and Petesia. Engraving. Plate 2, 1754. In The civil and natural history of Jamaica : in three parts. In three dissertations. The whole illustrated with fifty copper-plates : in which the most curious productions are represented of the natural size, and delineated immediately from the objects by Patrick Browne. London: T. Osborne and J. Shipton in Gray’s-Inn, 1756. Courtesy of the John Carter Brown Library. Attribution-ShareAlike 4.0 International (CC BY-SA 4.0)

A 1754 copper plate illustration by George Dionysius Ehret (1708-1770) produced for the book The Civil and Natural History of Jamaica (1756) authored by Patrick Browne depicts plant specimens Justicia and Petesia, whose possible medicinal applications were of interest to physicians. Browne was an Irish and Leiden/London-trained physician and botanist who studied and gathered medicinal plant samples when working as a physician in Kingston, Jamaica between 1746 and 1754. Simultaneously, Jamaica had become Britain’s largest sugar-producing colony with plantations worked by enslaved and trafficked African people. Browne’s study and the taxonomies that it presented were admired by the Swedish botanist and physician Carl Linnaeus (1707-1778) who included aspects of them in the tenth edition of his Systema Naturae (1759), in which he provided Latin binary names for each specimen. Linneaus’s binomial nomenclature was first pioneered in his 1753 Species Plantarum and simplified naming to a genus and species where in many cases, the species reference took the name of the male European naturalist who, from the colonial perspective, discovered the plant type. For example, Petesia, more commonly known as Panama Rose, was named after Patrick Browne; its current full “scientific name” is Petesia P.Browne.[1] This taxonomy replaced or disregarded forms of naming that preceded it, notably Indigenous forms.

Botanical illustration flourished as a form in the eighteenth-century Atlantic World and represented to colonizers far-ranging new knowledge of “exotic” plant life. The mapping and exchange of specimens expanded with colonial science. In the British context, for example, physic gardens (like those at Chelsea, Edinburgh, Cambridge, Kew, etc.), medical research, and colonial commerce fostered “a medico-botanic network connected by the movement of ideas, people, plants, animals and objects,” according to historian Claire Hickman.[2] Processes of colonial bioprospecting operated along with the trafficking of humans and the exploitative extraction of Indigenous knowledge.[3] 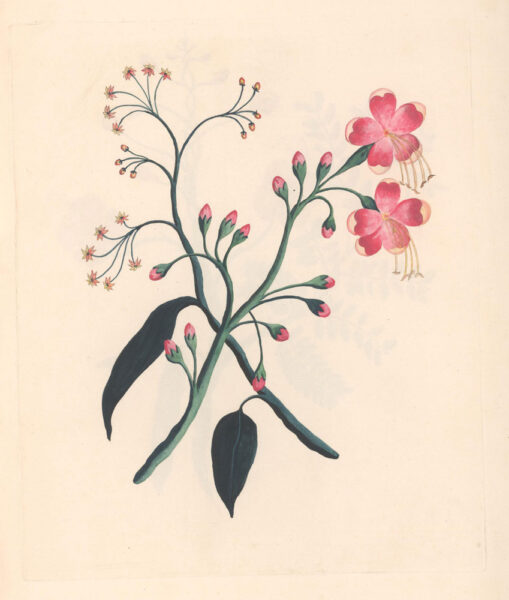 No. I. The Bombay Gossipium; or, silk cotton tree. … The smaller Flower drawn with the above. The Apocynum-erectum; or Wild ipecacuan. A strong vegetable Poison and Medicine. Handcolored engraving. Plate I. In A collection of exotics, from the island of Antigua by Lydia Byam. London: White, 1799. Courtesy of the John Carter Brown Library. Attribution-ShareAlike 4.0 International (CC BY-SA 4.0)

Lydia Byam (1772-after 1799) made fine illustrations for her publications, A Collection of Exotics from the Island of Antigua (1797) and Fruits of the West Indies (1800). Byam’s careful observations of specimens that continue to be of relevance to modern medicine also emerged directly from a context of slavery. Byam was the great-granddaughter of Edward Byam, Lieutenant Governor of Antigua between 1715 and 1741, and she was born at the family’s Cedar Hill sugar plantation, worked by enslaved people for 200 years.[4] Byam is an under-examined female protagonist who, in these works, both attends to and co-opts knowledge of the medicinal (emetic) properties of the Wild Ipecacuanha (Tupi-Guarani) and of the Smooth Cerasee plants, used in teas and as stomach tonics. Her illustration of Bombay Gossipium, furthermore, foregrounds feminine medicinal knowledge: this plant, otherwise known as the “silk cotton tree,” has medicinal applications for menstruation and birthing, and also as an abortifacient. 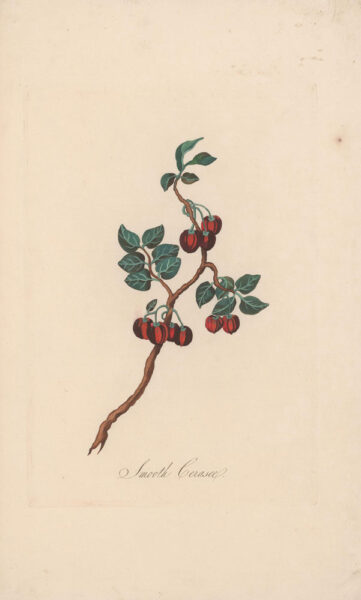 Smooth Cerasee. Handcolored engraving. Plate IX. In A Collection of Fruits from the West Indies, Drawn and Coloured from Nature, And, with Permission, Most Humbly Dedicated to the Princess Elizabeth by Lydia Byam. London: Wilson & Co., 1800. Courtesy of the John Carter Brown Library. Attribution-ShareAlike 4.0 International (CC BY-SA 4.0)

Historian Londa Schiebinger describes how in the eighteenth century, a confluence of factors including global strategies, the structures of scientific institutions, and gender politics pushed medico-botanical investigation toward certain parts of nature and away from others.[5] Her investigation of early examples of botanical illustration by another under-examined woman printmaker, Maria Sibylla Merian, however, explores pioneering medicinal knowledge and insight among enslaved women and, along with her wider research, instigates historiographic renewal. 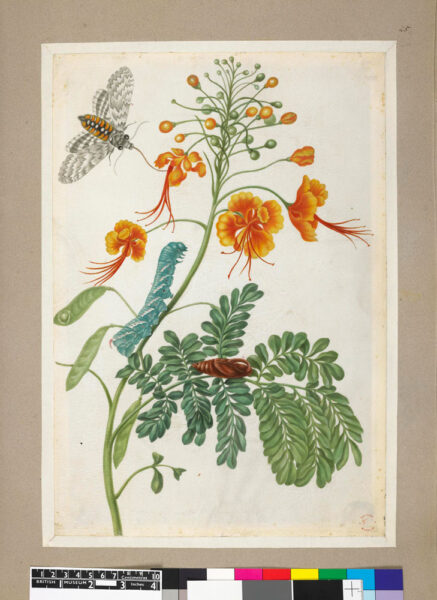 Maria Sibylla Merian, Orange-flowered plant, with example of a grey and orange moth, from an album of 91 drawings entitled ‘Merian’s Drawings of Surinam Insects &c’; with blue caterpillar and chrysalis Watercolour and bodycolour, with pen and grey ink, on vellum, ca. 1701-1705. © Trustees of the British Museum. Attribution-NonCommercial-ShareAlike 4.0 International (CC BY-NC-SA 4.0)

Frankfurt-born naturalist Maria Sibylla Merian (1647-1717) traveled to Suriname in 1698 to collect and illustrate insects and plants. Her 1701 drawing Orange Flowered Plant, locally known as the “peacock flower” features in her publication Merian’s Drawings of Surinam Insects. She notes in the text that the seeds of the plant were used by enslaved Amerindian and African women to induce abortion. In a context where enslaved women looked for ways to ensure their children avoided the fate of enslavement, where they were pressured to bear (enslaved) children, and where they were forced to provide sexual services to slave owners, these women frequently aborted their pregnancies. Sometimes, they also took their own lives.[6] Merian’s close observations point to abject horrors that enslaved women experienced, and yet her illustrations and notes also attend to the medicinal practices of women, asserting their botanical knowledge, collectivity, and bodily control under dire conditions.

As rich and under-recognized presentations of Indigenous knowledge, medicinal practices of enslaved women, and womens’ reproductive medicines, these illustrations reappear as a salient challenge to the intersectional injustices and invisibilities that have characterized the history of pharmacognosy—as well as the myopic colonial gesture of “scientific” naming— and that persist in afflicting structures of medicinal practices and research in the present.